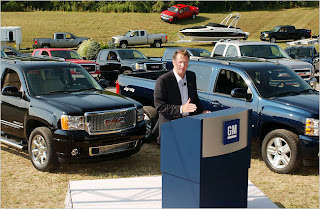 Last night I had a long conversation with my family about GM's CEO's decision to step down at the request of the Obama Administration. I was troubled by the White House's insertion in private business decisions but not sure whether their involvement in Wagoner's resignation would have potentially negative or positive implications with respect to government's role in business going forward. Should the government have the ability to make decisions about the inner workings of say, Apple, Microsoft, Target, etc?
My parents and fiance had a lot of smart thinking on the matter. In the end, I came to understand the federal government's role more fully in this particular case. The government is serving as the creditor for the auto industry. They should have the right to demand conditions amenable to their comfort level given that they're using taxpayer's money to fund a dying industry. If you loaned $1000 to a friend wouldn't you want to set expectations for when you would be repaid?
The government has already loaned GM an astonishing $13.4 billion and plans on contributing more. I would hope that the White House would be setting the parameters by which GM, Chrysler and other auto giants can receive the money. Kudos to President Obama for a job well done. And thanks to my family for bringing an array of opinions on the matter to the table. Always good to get thoughts from both sides of the aisle.
Posted by Erin at 9:43 AM