For my friend Stephanie 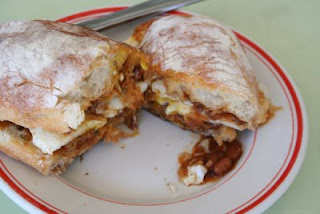 When Stephanie and I lived in northern Namibia, we would trade off making the two hour hike to see one another about once every 3-4 weeks. If she came to see me in Odibo, I made the creation and consumption of fried egg sandwiches a ritual. Stephanie makes the best damn fried egg sandwich of anyone I know. Truth be told, I've never had anyone else's. So how do I know that it's the best? It's like falling in love - you just know. (Dramatic analogy, I realize, but you get what I'm saying)

I stumbled across this picture of a fried egg, white cheddar, baked beans with homemade BBQ-beer sauce and fried onions on ciabatta and about DIED. Yes, it is 8am and this is all I want to eat right now. Totally decadent. Totally terrible for your cholesterol. Totally the best-looking sandwich I've seen in ages.

Stephanie, get ready girl. When I come to Chicago in July, we're making this one!