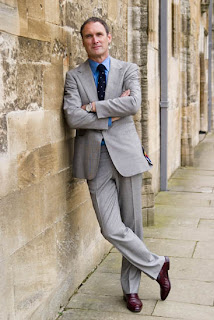 I picked up A.A. Gill's book A.A. Gill is away. A restaurant and TV critic for the Sunday Times, Gill is also well known for his travel writing and his blunt critique of all that he encounters. He really pissed me off back in the summer of 2006 with a scathing review of Albania, my dear friend Erjona's home country. Just read for yourself and I think you'll immediately understand why.

Like many great writers and artists, they say and do things we take issue with. What's indisputable is that Gill is a superb writer. He's known for 'interviewing places' in a way that on one else does.

So there I was last night, curled up on my couch with a collection of Gill's essays hanging on his every word.

In explaining how he captures the places he visits he retold a story about his first trip to the Milan fashion shows that caused me to pause and reflect about things much larger than the tale itself. I wanted to share it here.

"Every story has a key, an image that unlocks everything else. On the page it may not be obvious to the reader but for me it's a fixed point around which the story grows. I was walking with Nicola through the monumental Victor Emanuel shopping terminus [in Milan]. We were between shows, thinking about lunch and I suddenly stopped. I know I'd just seen something that was important. Turning around there was a woman. Incredibly elegantly and expensively dressed, perfectly accessorized. She was in a wheelchair. Thin useless legs in beautiful high-heeled shoes trying to negotiate the stop up to the Prada shop. Through the window I could see the shop assistants watching her. They didn't move. Their faces were bored masks. And I knew that the story would grow around that moment."