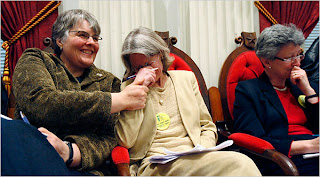 Gay and human rights activists and those who believe in marriage equality, including me, are pretty psyched about the recent gay marriage victories in Iowa and Vermont. Today, the Vermont legislature overrode Gov. Jim Douglas's veto of a bill allowing gay couples to marry.

Why is this so historic?? Because it makes Vermont the first state to allow same-sex marriage through legislative action rather than through a court ruling. This great news followed Iowa's legalization of same-sex marriages. These are great steps towards marriage equality for all.

For those who know me well, this is an issue I feel very passionately about. The idea that the government, at any level, has the right to determine who is able to marry, and base such a decision upon a person's sexuality is a violation of a person's human rights.

Congratulations to those who have advocated for marriage equality. Let's hope President Obama will follow suit because it's the right thing to do.
Posted by Erin at 10:00 PM