Caramelized corn with tomatoes and bacon 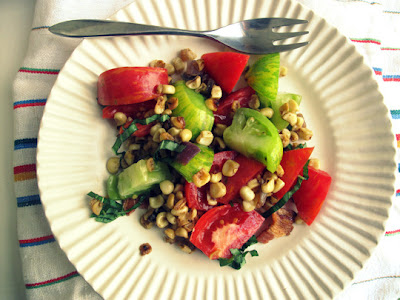 I recently signed up for Washington's Green Grocer, a home delivery service of local and regional produce and products, and have fallen in love.

I generally head to Whole Foods once a week to stock up on greens, fruits and the other incidentals we need for yummy meals, but since I'm buying enough for 2-3 heavy grocery bags, it's become a true production getting there and back without pulling a muscle or splurging on an unnecessary (but comfortable and sweat-free!) cab ride home.

The Giant in our neighborhood has excruciatingly long lines and its produce and seafood generally look less than fresh.

Peapod was certainly an option that intrigued me but we couldn't make our schedules work so that one of us was home within their drop-off windows.

Washington's Green Grocer has solved that problem. They drop off at your front door (or wherever you ask them to leave the goods) and charge you once you've received everything. A small box of food (some organic, some not) runs around $31 and offers you PLENTY for one week of cooking. They email you the list of food for the week on Monday for delivery on Thursday so that you have an opportunity to say, for example, I don't want the cantaloupe but would instead like two orders of corn. Magical, right?!

So in honor of all of the veggies we're consuming, this simple recipe from the kitchn is exactly the thing to make when you have an abundance of tomatoes and corn around. Enjoy.

Cut the bacon into 2 inch pieces and fry in a large skillet over meduim-low heat. As the bacon gently cooks, cut the kernels off the corn and chop the onion.

When the bacon has crisped, remove from the pan with a tongs and drain on paper towels or newspaper. Leave the fat in the pan and the heat turned down medium-low. Add the onion and sauté for about one minute and then add the corn. Sprinkle on the sugar and stir gently. If the pan seems to dry, you can add up to 1 tablespoon of butter but be careful, you don't want the dish to get greasy.

Keep an eye on things, stirring and scraping the bottom of the pan, until the corn starts to turn golden brown and smells caramelized. Remove the pan from the heat and stir in the herbs. Let cool slightly.

Meanwhile, chop the tomatoes into large chunks and place in a serving bowl. When the corn is no longer hot, add to the tomatoes and the reserved bacon and toss gently. Taste for salt and pepper and serve. 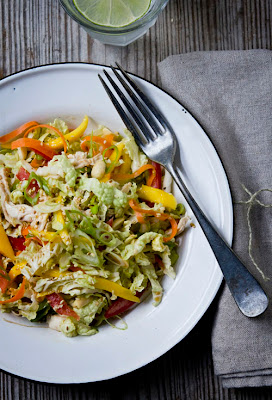 This salad has provided me with a fresh new take on the typical weeknight greens I throw together haphazardly. It's light, refreshing and healthy -- and pretty! Definitely don't forget to add in the peanuts or almonds. They really do the trick. And just as a heads up -- I thought this was quite a large portion for just two people so I think you could definitely enjoy it as a meal for three, or just plan on having plenty for leftovers.

Feel free to substitute the chicken with grilled tofu, shrimp or any protein of your liking.

1. To poach chicken, place the breast in a small saucepan and add water, about 1 inch above the chicken. Cover and bring to a boil. Once boiled, immediately lower heat to a very slow simmer and partly cover for 10 minutes. Turn off the heat and leave the chicken to cook in hot water for another 15 minutes. Once cooled, shred chicken and set aside.

2. In a large bowl, whisk together all the ingredients for the spicy ginger dressing.

3. Add the cabbage, chicken, carrots, tomato, mint and cilantro to the large bowl and toss gently. Top with mango slices and roasted peanuts. Garnish with scallions and roasted sesame seeds, and serve immediately. 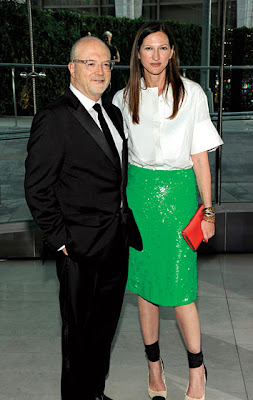 Lyons is my favorite fashion maven these days.

I swooned when she showed up to the Costume Institute's ball this year in a J. Crew sweater over a glamorous feather floor-length skirt, red lips and wind-whipped hair. She made it all look so cool and effortless. Everyone else looked beautiful but she made the dressed-down look almost more glamorous than the ball gowns surrounding her.

This article in New York Magazine is well worth the read (and the pictures of her at work are pretty awesome). 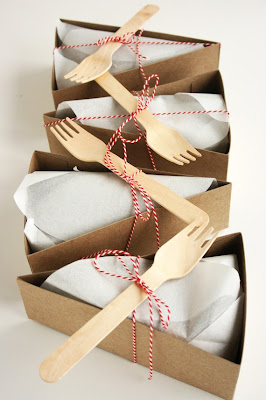 I had to include an exclamation point in the subject line of this post because I can't contain myself -- these pie kits are so damn cute! If you're a master baker, a novice or buy pies but want to serve them up in a creative way, Petit Moulin has come up with a genius concept. Just look at them! They're absolutely adorable. I would even eat at a broccoli pie out of them just for the sake of having something so cute around me.

Hurry, get them now before they're all gone!

(via Petit Moulin on Etsy) 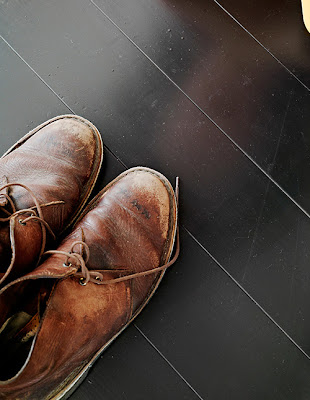 I spotted some shoes like these on my Dad the other day and swooned over them. Sure, girls could wear these with some much-loved-many-years-old jeans and a chunky sweater, but they look pretty damn great on a man.