How do you feel about the economy? 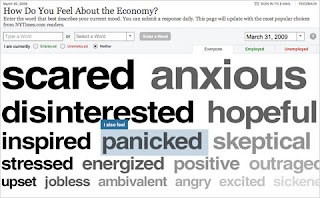 I was saying to my Dad last night that I feel optimistic that we'll eventually emerge from this recession but I feel quite cynical about our country's ability to shake the excesses we've come to covet. I'm not convinced that an economic recovery would bring lasting change to our unhealthy spending habits.
Why?
Look at what's happened in such an astonishing period of time:
In the 80s, only Nevada and New Jersey had casinos. Now 12 states do and 48 have some sort of legalized betting.
The end of the world we once knew is certainly over, I'm just not convinced that our bad habits have been replaced with long-term prudent ones. Call me a pessimist. You're right - I am, in this case. I'd like to be proven wrong. I'd like to see this country admit that it needs help, that we need a wholesale rehabilitation, and I'd like to see us emerge triumphant from the mess we've gotten ourselves into.
We have a long way to go.
(Image via The Caucus)
Posted by Erin at 2:34 PM