National Geographic takes us "inside the Presidency" 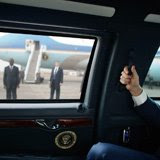 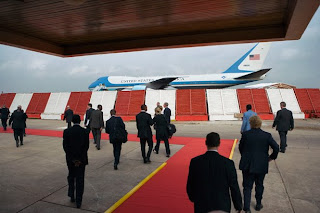 I've been obsessed with the Presidency since I was a little girl.
I used to sit at the public library for hours upon hours and read about JFK and his advisors. In college I majored in American Politics and wrote my senior thesis on President Clinton's decision not to intervene in the Rwandan genocide in 1994. Out of college, I spent a year working for an interactive firm that built websites and developed online strategy for Presidential candidates and Congressional members.
How Presidents wield their enormous power and to whom they delegate to fascinates me.
I couldn't have been happier than to see Elizabeth Bumiller's piece. "Inside the Presidency," in the January 2009 issue of National Geographic. Take a look at the intro and just a snapshot of some of the bare, but very revealing photos Christopher Morris took (note: President Bush's face is never shown):

"History always makes a sharp turn in Washington when a new American President takes the oath of office, and so it will once again on January 20, 2009. There will be new Cabinet members, a new Congress, a new foreign policy, a new style in the East Wing, new embarrassing relatives (if the past is any guide), and new first friends.

But many other things in the private world of the President of the United States will stay remarkably the same. The maids on the permanent White House housekeeping staff will make the presidential bed, just as they always have. The kitchen staff will still peel potatoes and scramble eggs. The gardeners will have planted 3,500 tulip bulbs to bloom in the Rose Garden in the spring."