Behind a presidential press conference 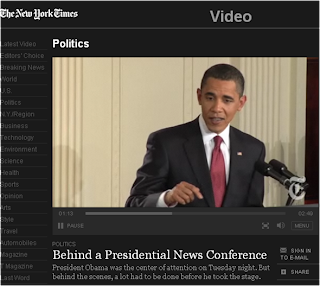 I watched this short "behind-the-scenes" video on the New York Times' Caucus blog and loved it. The piece uncovers the meticulous planning that's required of the President's staff and the press prior to such a high profile event at the White House.
What was most fascinating to me was twofold: I was surprised, but delighted, to see that the Times chose to be open and transparent about their internal process for deciding which questions they would ask the President by showing clips of their staff's internal brainstorm. Lastly,Obama did not end up calling on anyone from the Times for a question last night, or a reporter from The Wall Street Journal, The Washington Post, Bloomberg or Reuters, instead offering questioning privileges to Univision, Politico and Agence France Presse. As the narrator of this video explains, that decision unto itself was also planned. That may seem obvious to a lot of you, but I still found it intriguing.
Posted by Erin at 12:39 PM