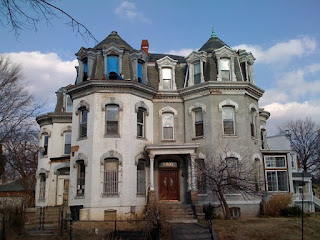 My fiance and I embarked on a lovely jaunt around Ledroit Park this weekend and came across this run down mansion at 3rd and T Street NW. The house has been split into two apartments but you can imagine that at one time a very important Washington family once inhabited its lavish quarters.

When I see a house as magnificent as this - despite that its seen better days - I often think of the book and movie A Secret Garden, which was an absolute favorite of mine as a young girl. I longed for an enormous palace filled with mystery and intrigue, secrets and strange possessions. As soon as I spotted this gem off the Park, I was reminded of my childhood longings. They still remain despite the passage of time.
Posted by Erin at 7:37 PM