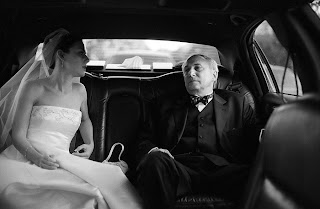 Thanks to Yelp, we've found our photographer for the wedding. Carl Bower is a documentary photojournalist based in Washington, DC. He was one of two finalists for the Pulitzer Prize for Feature Photography for his series of photographs of a woman's fight against breast cancer. I wish I could pull some of his documentary work to show here but much of his work is in Flash. I've included a shot from one of the weddings he's done that I'm intrigued by. When we met with him he said that he actually had a shot of the bride and her father looking directly at each other in the car, but he felt that there was far more intimacy in this frame than the other.
Posted by Erin at 1:47 PM