I found my wedding dress!!!! 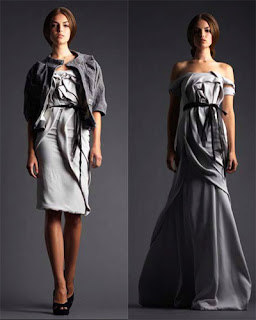 It's true! I cannot believe it! I had an appointment last night at Hitched, a bridal shop in Georgetown, and truth be told, I was not optimistic. Since July of last year I have had my eyes set on the cement gown above with the black sash, which I found on Fashion is Spinach. It looked so NOT wedding dress, is cut beautifully and ohhhhh....how I loved the draped straps! Being that it was a Fall 2008 piece from the designer, Joanne Reyes, the designer and founder of Vicente Villarin, I knew it would be a tough gown to track down. That definitely turned out to be the case.

Only two boutiques in the states actually sold the gown - Des Kohan in LA and Bellhaus in the Hamptons. Bellhaus sold the one they carried and Des Kohan hasn't been able to confirm whether or not Joanne will be able to make it for me.

I walked into Hitched with an open mind despite my longing for Villarin and was met by Annie, a professional, but down-to-earth sales assistant who encouraged me to try on a bit of everything - a ball gown, something lacy, a little sheek number - all so that I would get a sense of what really looked best on my figure and so that no stone was left unturned. I found something I loved in ALL of them. I shockingly even took to two of the ball gowns! But the one I fell in love with was the first one I tried on. Fate isn't it?!
Posted by Erin at 9:18 AM