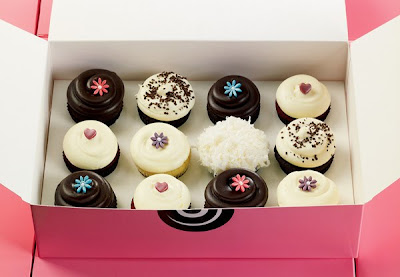 The lines are generally around the block and the wait can be up to an hour, but as silly as it is to say, the cupcakes at Georgetown Cupcake are so worth it.
I was surprised today to see not a single person standing outside their store at 2pm on a Sunday. Turns out -- as I'm belatedly learning -- that they moved just around the corner to M Street, and the owners -- Katherine Kallinis and Sophie LaMontagne -- are opening up a second store in Bethesda. This is all within a year and a half of opening!
The amazing part about their success is just how unexpected it seems. Neither woman had trained as a baker or had a career in the food business. In fact, Kallinis was an event planner for Gucci and LaMontagne worked in private equity before giving up their careers to start Georgetown Cupcake.
While they have a lot of competition from stores such as Hello Cupcake and Red Velvet, Georgetown really is the best.
My husband had his first two today and couldn't stop raving about them. The "ooohhhhing" and "ahhhing" actually didn't start until after several minutes of silence in which he devoured the cupcakes in a few bites, sat back, closed his eyes and smiled.
Now, THAT'S a testament to how good they are.
Posted by Erin at 5:50 PM