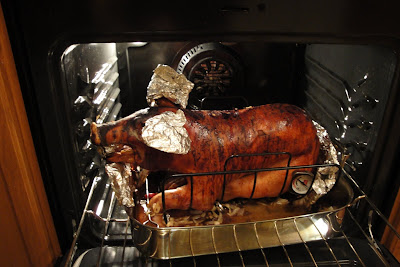 On Sunday, I roasted a 15 lb. suckling pig.
Why?
Julia Child and Anthony Bourdain are partly to blame.
My Mom gave me DVD's of Julia's The French Chef series for Christmas and the suckling pig episode just happened to be one of the first ones I watched.
And I must admit, I was entranced. It seemed like the kind of culinary endeavor that only the insane try -- I mean, it's an entire animal, snout, eyes and all, and it's HUGE. But Julia made it look so easy, nearly as easy as roasting a chicken. In fact, it's pretty much the same process -- stuff, truss and roast.
The other key 'turn on' to roasting a whole pig was Bourdain's episodes in China, where he goes on a roasted pig crawl of sorts in search of succulent pork skin, ears and feet. Seeing whole pigs hanging in human-sized roasters, constantly being basted with oil, soy sauce or some other lovely sauce convinced me that this must be one of life's truly great meals.
How could I not give it a go?
So off I trudged to Eastern Market on Saturday in search of a pig.
The butchers at Union Meat Company looked at me a bit quizzically at first when I asked for a suckling pig.
"What made you decide to roast a pig?" one of the butchers asked.
"Julia Child," I replied.
He nodded approvingly and off he went to find the pig.
Thank goodness my parents came along to help drag Mr. Pig back to the car. He was a heavy sucker, that's for sure.
While riding home, I had a moment where I thought, "What have I gotten myself into? What if I screw this up? This was NOT a cheap decision!" But once you've gone down that path, there's no turning back. You just have to take a deep breath and trust in the wisdom of Julia Child to get you through it.
As soon as I got him home, I filled up the kitchen sink with cold water, took Mr. Pig out of the packaging and placed him in his bath.
About 4 hours later, he was fully thawed out and ready to be wrapped up and placed in the fridge until Sunday.
Around noon the next day, I took Mr. Pig out of the fridge to bring him up to room temperature, which takes about two hours.
Around 2pm, I pan-roasted about 2-3 cups of diced onions and carrots for a simple filling. I gave Mr. Pig a good wipe to make sure he was as clean and dry as could be.
Then I dressed his insides with salt, whole peppercorns, fresh sage and dried thyme. Then I added in the carrots and onions. Easy and done. Phew!
At this point, the hard part began. Trussing a 15 lb. animal was more difficult than I had anticipated. My Mom had lent me several skewers, several small nails (Julia actually uses thick nails to truss her pig) and some yarn. I must have spent a good 20 minutes struggling to sew him up properly, stopping and re-starting several times. At some point I heard my friend Megan's voice in my head say to me, "Everyone should have a hobby that requires patience." I couldn't agree more (in theory). With a large pig sitting on my counter, all on my own in the endeavor, I definitely took issue with that lovely mantra for those 20 excruciating minutes!
Once you've got him sewn up, you simply put him in a roasting pan on top of a rack. Slather him in olive oil and skewer his back legs together so that they don't splay out during the roasting process.
At this stage, most of the work is done. Amazingly simple, right?
Pre-heat the oven to 450 degrees, pop in Mr. Pig and let him roast for 30 minutes before basting him once with olive oil.
After 30 minutes, turn the heat down to 350 degrees and leave him alone for about 2 hours. At that time, you can baste him with a Chinese sort-of sauce that includes dried mustard, soy sauce and honey. This has a wonderful smell and the effect of turning the pig very dark and lovely. Let him roast another 20-30 minutes at that temperature.
Once you've hit 3 hours, you should let him rest in the oven at 175 degrees for 30 minutes - 1 hour.
Now the big moment had finally come.
15 lbs is indeed a lot of pig meat, so if you have any interest in undertaking this endeavor, I highly recommend inviting over a bunch of family and friends, as we did, to enjoy the feast. Have them bring over a couple side dishes and a few bottles of wine and you're all set. Everyone feels like they've participated in their own way.
Mr. Pig turned out to be delicious. The best part really was the skin. I loved its crispy texture and soy-flavored taste.
The meat itself was rich and juicy.
There were tons of leftovers, of course, but if you find yourself in the same position, don't be dismayed. You can use them to make a pulled pork or have a big taco feast another night. There's an endless array of options!
Many thanks to my family for their enthusiastic support and consumption of the meal!
Posted by Erin at 3:26 PM