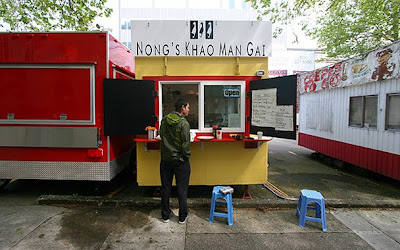 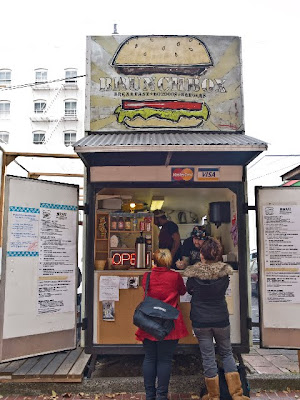 It's been three or four years since my first trip to Portland, Oregon. I either completely missed the boat on the food cart craze that has since taken over the city, or it was still in its infancy at the time of my visit. Regardless, it's time to return.
According to Matt Gross of The New York Times, there are more than 400 food carts in Portland. Some owners claim that it takes just days to set up shop. Unbelievable.
I took at look at FoodCartsPortland.com and found a stunning array of culinary choices. From popsicles to Peruvian cuisine to pommes frites, whatever you want, Portland's street vendors serve it.
And I have to admit, after reading more about the subject, I'm hooked on the concept. Just read this:

"Food carts are about supporting small, locally-owned businesses and small start-ups that might not have the capital or credit to open up their own full-fledged restaurants. Food carts help create a vibrant downtown and central city by bringing what planning geeks call a "social fabric on the street" which is great in cultural terms, but in economic terms also attracts other spenders, retail outlets, and restaurants and cafes. Food carts also often illustrate the delicious benefits to a growing ethnically diverse community, as many immigrants own and operate them and make and serve some pretty tasty ethnic specialities."

So, I have to ask -- why doesn't DC have its own food cart craze?
The answer, I found, is in a 10-year moratorium, which resulted from fights over choice locations and uneven collection of taxes and fees. Back in the days when street vendors were less tightly regulated, there were more than 1,200 food carts in operation across the city. In 2007, there were only 200. A lottery that same year provided dozens of new licenses for downtown street vendors. However, much of what you find in a food cart in DC will be chips and hot dogs. The District's vending project coordinator, Sam Williams, said that it's the "fear of the unknown."
To inspire culinary change among current street vendors, District officials have offered free orientation meetings, one titled "You Don't Have To Sell Hotdogs." Only three people showed up.
We may be behind the curve, but I haven't lost hope. And neither should you because Sam Williams is from -- where else? -- Portland, Oregon.
We're in good hands.
(Images of food carts Nong Khao Mong Gai and Brunch Box)
Posted by Erin at 2:11 PM