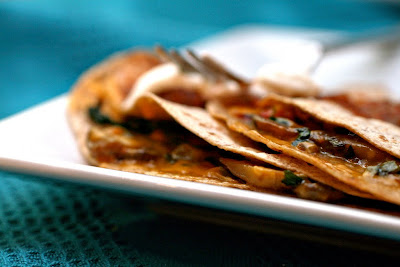 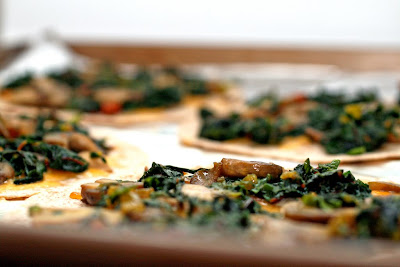 I'm making these this weekend.

Preheat oven to 400F. In a large sauté pan, add the mushrooms, swiss chard and habanero, over medium-high heat. Cook 3-5 minutes, until mushrooms begin to give off their juice. Stir in scallions, cilantro and salt. Allow to cook, stirring occasionally, until the liquid is evaporated, about 5 minutes.

Arrange tortillas on two baking sheets. Divide cheese among each tortilla. Transfer to oven, and bake 2-3 minutes, until cheese begins to melt. Carefully remove from oven, and divide mushroom mixture among four tortillas. Top with the remaining four tortillas, and return to oven. Bake 4-5 minutes, until the edges turn golden brown. Enjoy topped with salsa and sour cream.

PS: I ended up making these with kale and red pepper flakes instead of swiss chard and jalapenos. They were perfect substitutes.