When the Obamas come to town 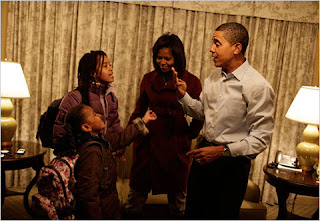 This week District police have closed off much of the area surrounding the Hay-Adams Hotel on 16th Street since the Obamas have taken up residence there until after the Inauguration.

I jumped on the S2 yesterday morning for work and the S4 today. On both occasions passengers appeared to lose their minds as soon as the bus made a left turn off its normal route onto K Street. “Sir!!!! What are you doing?!?!?!” “Bus driver!!!! Stop!!!”

Most of the people who ride those bus lines work downtown (or they get up far too early to go window shopping). How did they not know that that area would be closed? All I heard in the news over New Years’ weekend was about the Obamas arrival in DC, when Michelle was bringing the girls to town to get ready for school, where they’d be staying…

As cruel as this may sound, watching people jump up out of their seats with looks of terror on their faces at the thought that the bus was potentially taking them a few blocks out of their way, made me chuckle. What’s three more blocks in your walk to work anyways?

If Larry David, however, were on board and he had no idea why the bus was going ‘off route’, he would have had a field day. And I definitely would have bought HBO if only to watch that one episode.