The injustice of the "digital divide" 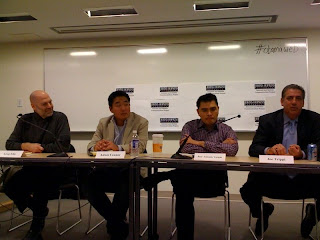 Last night I had the pleasure of listening to one of my favorite reporters, Jose Antonio Vargas (3rd from left in the pic) of the Washington Post, speak at Johns Hopkins about internet technology in the 'Obama age.' While Joe Trippi, a fellow panelist at the event, spoke at length about what changes we can anticipate seeing at WhiteHouse.gov, it was Vargas' eloquent and passionate remarks about the "digital divide" that grabbed a hold of me, leaving me pained, feeling like I've done nothing in my own life to address this problem.

John Edwards often said that there exists "two Americas" - the rich and the poor. But we rarely see, hear or discuss those who go without or carry on in life with very little. Our politicians are happy to talk about the middle class and its current woes in our sour economy, but what about the people living on welfare? What about the single mothers struggling to pay their rent, feed and dress their kids and get by on an hourly wage with no health insurance? Why aren't we inserting them into our political discourse? Is it too tough a subject? Are we ashamed to admit that we don't have the answers to their very serious, very real problems?

On a micro-level thinking of this gap, Vargas has been one of the few national reporters to cover the digital divide between the rich and the poor - "one that's connected to high-speed Internet - socializing, paying bills, uploading debate questions to presidential candidates on YouTube - and one that's not."

Vargas accurately reported in 2008 that "in a presidential election that's being fought as much online as off it" many candidates ignored this critical issue.

Studies have shown that closing the digital divide helps minimize other disparities, including education, health care, housing and economic opportunity.

So what should be done? It has been said before on TechPresident, and I'm throwing my support behind it 100%, that the Internet is a public good in the same way that we think of water and interstates. Our government should commit to providing wireless Internet access nationwide. I believe we can do it too. It's not matter of "can we" it's a matter of "will we."

Look at Estonia! They declared internet access a basic human right, ahead of EU countries such as France and Italy. We have examples to look to for inspiration and guidance. The time is now.
Posted by Erin at 5:47 PM