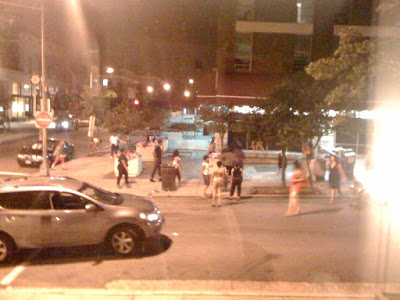 As much as I'm not keen on DC (belatedly) finding the Real World MTV in our District, I fully admit that I'm following the day-to-day drama on Twitter and in the blogging world.

The crew that blogs at The Anti-Real World DC live right next to the cast and crew and are soaking up every bit of gossip and sighting they can. If I lived next to them, I too, would likely do the same. But this morning's post actually alarmed me...

Anti-Real World bloggers reported around 3am this morning that a fight between two women (non-cast members) was taking place outside the house. They reported, "One woman beat another woman senseless on the ground for a full ten minutes as their friends let them fight...it's actually still going on as I write this."

So what do I immediately wonder? "Ummm...why are they sitting at the computer blogging about a violent altercation between two people when they should be calling the cops?" It's tough not to assume that they decided that it was more important to get coverage of the fight down first before attempting to call for help.

Of course, someone asked just that in the comments and Berg, one of the bloggers, said that he had in fact called. Rule #1: don't make yourself sound like a selfish, attention-hungry blogger. The community will call you on it.
Posted by Erin at 12:03 PM