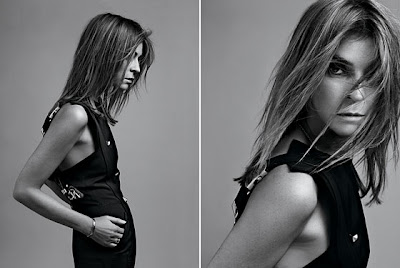 A bit of shocking news hit the fashion world last weekend when Carine Roitfeld, editor of French Vogue, announced that she'll be stepping down from her post in January after 10 years at the helm.
Rumors are that French Vogue will bump up Emmanuelle Alt, Fashion Director for the magazine, to the top spot, but that's just speculation at this point.
No matter how this shakes out, it's a big moment in fashion, but a bigger one for Roitfeld who remains undecided about her next move. She was once asked in an interview with New York Magazine what she thought of American fashion editors. Her answer was quite blunt:

"The American editors are very, how you say, slick. Very perfect. Hair is perfect, they have a manicure. They are very clean, they follow fashion. I don't think they take many risks. They do the total look of Prada. Me, I wear a lot of Japanese piece mixed with a bit of classic Hermes and Prada. Even thought jeans suit me, I never wear jeans."

I think there's a lot of truth to what she says about Americans with respect to how we dress. Looking less put-together is tougher to pull off here, or shall I say, less appreciated, than it is in Paris.
To each their own, right? Good luck to Carine. I'm sure her next move will be an interesting one.
Posted by Erin at 11:20 PM