Man, that's a lot of people 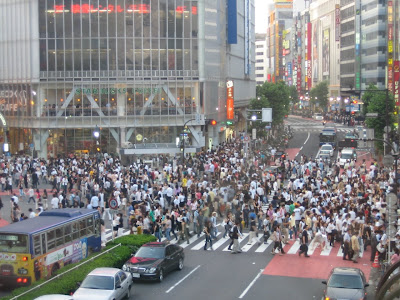 We stepped into Shibuya station yesterday afternoon and witnessed the myth and then the reality of the world's busiest train station. Nearly three million passengers walk through Shibuya's stalls every day. And by "walk" I really mean jog. Imagine a sea of half-jogging people making there way in a thousand different directions with you at the center of them. You think New York is crowded and crazy - think again because it's absolutely nothing compared to Shibuya.

I wouldn't recommend walking into this station without much idea of where you're going. It's complete (managed) chaos. Everyone except us knew what they were doing and where they were headed.

Tom's standing there looking up at the station signage, spinning in a circle wondering which line we should take, while hundreds of Japanese push past him, politely shoving his body out of their way while he's shouting at me, "Which way should we go??"

"AHH! Let's just go this way!" I exclaimed. And off we went.

Wow. And people do this every day? Amazing.
Posted by Erin at 8:57 PM