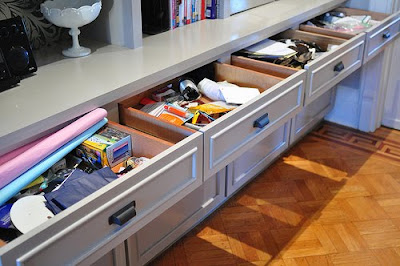 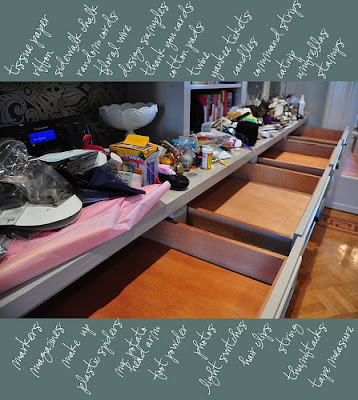 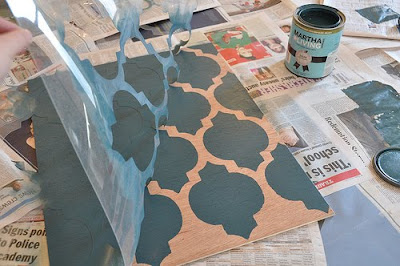 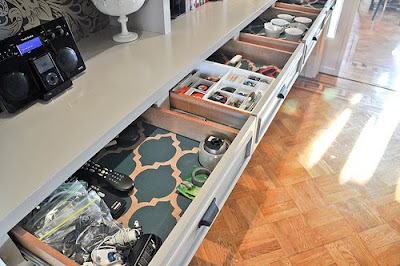 The drawers in our downstairs shelving unit are a complete disaster. I've gone through them several times and thrown random crap away but inevitably bits of this and bits of that remain, leaving it looking virtually exactly as it started -- an ugly mess.

But because what lurks inside these drawers only sees the light of day by choice, I forget this problem exists until I go looking for my checkbook or I'm on the hunt for a pen.

The good news is that I may have found the inspiration I need to address this drawer dishevelment thanks to Adventures in Renovating a Brooklyn Limestone. She had the same drawer predicament as I do, though she had the will to address it. See how:

"After I had throw so much away it wasn't too hard to put it all back neatly but let's face facts: there was zero chance I'd keep it that way. So I thought about how I could encourage myself to keep it neat.

Out came the Casablanca from Cutting Edge Stencils (ordered for an entirely different project I'm saving til later this year) and some thin pieces of wood cut to size. Not only was it a good way for me to practice the stenciling technique but having a pretty pattern would encourage me to keep organized so I could see through the bottom. Two birds, one stone - hooray.

I used my new favorite shade of paint - a mix of navy and teal called Plummage by Martha Stewart.

The used a white plastic organizing tray I had laying around as well as some old teacups I had leftover from another project. (I'll probably add more teacups as I find them.)"

(Photos via Adventures in Renovating a Brooklyn Limestone)
Posted by Erin at 10:15 PM